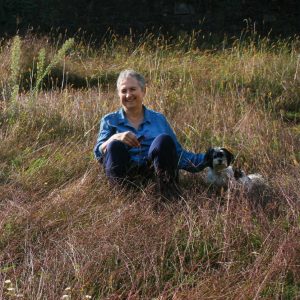 Since childhood Nadia was drawn to the traditional music of her native Ticino, Switzerland and the neighboring and culturally equivalent region of Lombardy, Italy.  From her mother, at scouting camps, at local festivals and on the radio she learned traditional songs usually accompanied by guitar and sung for generations in the Swiss and Italian Alps.  Later Nadia’s passions extended to songs from different linguistic areas (various dialects and languages of Italy, France, England, Ireland, Scotland, Spain and Latin America).

In the 1970s, Nadia studied at the University of Bologna earning her degree in the Discipline of Art, Music and Performance.  While studying she also recorded a feminist album Alle Sorelle Ritrovate (“To the Rediscovered Sisters”) and learned and played the traditional music of the Emila-Romagna region of Bologna.

Back in Ticino in the 1980s, Nadia played in a group called Veranda with whom she recorded Milano Stazione Centrale, a collaboration with composer and accordionist Peter Zemp.   Later, while living in Geneva, Switzerland, Nadia created and performed a solo musical show called Ballad of the Bristly Goat.

Nadia reunited with Peter Zemp in a group called the Trio in Carpione with whom she recorded A Volte I Pesci Cantano (“Sometimes Fish Sing”), again with Peter Zemp as composer and accordionist as well as with bass clarinetist Simone Mauri and jazz guitarist Moreno Pellerito.

Upon re-locating to the United States and inspired by her years in Geneva, Nadia also composed and recorded a solo CD called Mais où vit le silence? on lyrics by Swiss French poet Claudine, a collection of original instrumental pieces and songs sung in French.

Nadia returned to Ticino from the United States with a concert she created of both American folk and rock songs and original compositions entitled From America with Fury performed on the eve of the 2016 U.S. election of President Trump at the Teatro Sociale in Bellinzona accompanied by Peter Zemp, Simone Mauri and Clara Zucchetti. 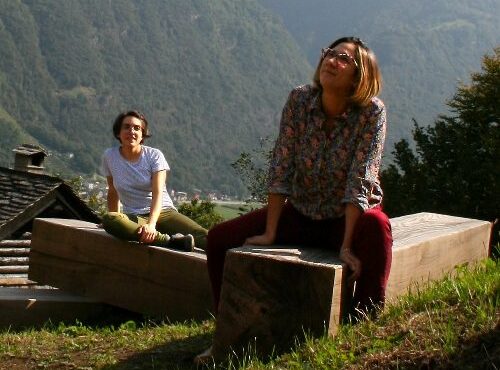 Active since 2013, Sara Magon and Clara Zucchetti met during their musical studies at the Como Conservatory and began to cultivate a passion for ethnic music, combining the study of contemporary composers with popular world music.  Together they performed in live music venues including opening for the concerts of Tonino Crotone and Daniele Ronda.

Sara and Clara also shared the stage with Paolo Tomelleri and Elllade Bandini and participated in numerous festivals , most recently, Time in Jazz (2021) organized by world famous trumpet player Paolo Fresu, as well as Ukulele Social in Venice, Ukulele Night at the Carroponte in Milan, and the Music Fair in Pizzighettone (2017) on the stage of Eko Guitars.  In 2018, Le Due nel Capello, Sara and Clara, released their first album Today It Doesn’t Rain.

in collaboration with Elisabetta Zulian and Fiorenzo De Vita, Sara and Clara also produced a book and CD on a method for teaching ukulele to children called Let’s Start Soon with the Ukulele (Curci, Milan 2016) which includes a CD of original songs composed by Sara and Clara.

Sara Magon: Sara is a graduate of the Como Conservatory (Level I guitar and Level II teaching) and also studied at the School of Music Therapy of Assisi, followed by a course in musical animation from the Di Benedetto Study Center in Lecco.  Sara’s training also includes vocal improvisation seminars and various guitar improvement courses.

Sara played as a soloist in both classical and modern styles including concert tours in Seoul, South Korea, Netanya, Israel and Maldon, England.  She is coauthor of Let’s Start with the Ukulele (Curci, Milan 2016) and is a trainer for teachers and educators in this method.  She collaborates with musicians and artists in Swtizerland and Italy, most recently with Raissa Avilés.  She also teaches music in Como, Varese and Switzerland and is a tenured guitar teach at the Anna Frank Middle School in Varese.

Clara Zucchetti: Clara started playing the piano at age 9 then decided to dedicate herself to percussion graduating with a degree in percussion from the Como Conservatory where she also cultivated a passion for singing, ukulele and songwriting.  Clara also participated in several voice research seminars in Gisela Rohmert’s Functional Voice Method.

Clara plays in numerous groups as a percussionist, vibraphonist, keyboardist and singer and choir member.  She collaborates with musicians from Ticino, Switzerland and Lombardy, Italy including Marco Belcastro, Simone Mauri, Franco Parravicini, Nadia Gabi, Raissa Avilés as well as performers on the international scene such as Mario Arcari, Paolo Tomelleri, Jonathan Coe and the Orchestra of the Academy Theatre at the Scala.  Clara has played numerous festivals including Collisioni Festival (2014) and the Mantua Literature Festival (2017).

In 2019, Clara participated in the Italian Women Tribute Band Tour as a percussionist and back up vocalist.  In 2020 and 2021, Clara performed with Marco Belcastro at the RSI Studio in Lugano for two broadcasts conducted by Gianluca Verga.